ICT Ownership
Owns a smartphone and a laptop, both recent models: the phone is a foreign brand, and the laptop is a Chinese one. Uses a desktop at work.

ICT Use
She is a university graduate and grew up using the Internet. She is constantly online, either on the phone or on one of her computers. Does not own a television, nor a radio – most of her work, leisure, and social activities are mediated by ICT.

Information Environment
She does not read newspapers, does not watch tv, does not listen to the radio. She reads the news online and participates to several online bulletin boards (BBS) and QQ groups* dedicated to specific issues she might be dealing with. When village officials ask her to find information about specific issues (e.g. local government regulations, commerce, or even farming), she will do a search on baidu, or post a question to a BBS, or ask her university classmates on QQ.

She knows there are specific websites regarding agriculture, trade, and government regulations, but never looks at them, because it’s faster to ask friends or look online, even though the answers might be inaccurate. 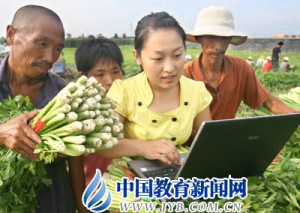 majors can take the exam to become a village administrator, which can consist of a couple of rounds of interviews with general questions (e.g. how can your field of expertise benefit the village), as well as specific ones (e.g. the village has this problem, how would you solve it). If students pass the exam, they are sent to work in a village for three years, at the end of which they can receive an urban residence permit (hukou).

The village where Ms Sun was assigned is not very far from Beijing, and many young people move to the city or commute to the nearby county seat to work. Most of the permanent residents are older people and children left to the care of their grandparents. Ms Sun works in the office of the local administrators, and her job consists mostly of helping them to write reports on the computer, and to look for information online, from party policies, to village regulations, to business opportunities, to specific issues the village has to deal with.

The office has several computers, which had been sent by the city of Beijing as part of a development project for the countryside. After a few months of working with the local officers, she proposed to them to organize computer classes for the villagers, using the office computers outside office hours. The officials thought it a good idea, and they advertised it through the loud speakers that criss-cross the village. Loud speakers are still an important way of communicating official information in rural villages.

People could come and use computers by themselves, or ask Ms Sun to help. Many of the people who showed up had never had any experience with computers, so Ms Sun started by showing them the most basic operations, e.g. how to turn on and off a computer, and how to launch a browser. Then she taught them how to input Chinese characters using pinyin, a Romanization system that is now widely taught in schools. Most people had either never studied it, or had forgotten it, so this was a significant stumbling block, and a few people just gave up. She continued helping those who persisted, though, by showing them how to browse the Internet, how to find videos, music, games, and news websites.

Some of her younger students, more comfortable with typing and with technology in general, were soon going online by themselves. Other people would ask her for help in finding sites they were interested on – mostly games, or movies and television programs. Occasionally people would also ask for help with practical information regarding agriculture, and she would try searches on baidu, or ask her former university classmates on the instant messaging program QQ. She is not an expert in agriculture, and so was not sure how to search for specialized information in that field. She had heard there are websites dedicated to different aspects of agriculture, but she found it quicker to search baidu, or tap her own network. A couple of her university classmates were also aides to village officers, in other parts of China, and they often shared their experiences and tried to help each other.

The presence in villages of young people with urban experience can constitute a catalyst for computer and Internet use. They can be university graduates on short-term administrative assignments, like Ms Sun, or returned migrants who have learned to use computers in Internet cafes in the city, or middle- or high-school students who take computer classes at school. Their families, neighbors, friends, co-villagers see them going online, and learn about the meaning of the Internet, and the possibilities that it can open up.

Better educated people like Ms Sun are often dismayed that most villagers seem only interested in watching videos on youku.com (a website similar to youtube.com) and in playing games (card games were particularly popular among older users, because it was something they could immediately recognize from their offline experience). She felt very strongly that the Internet could bring real opportunities to rural residents, from new business contacts for farmers to expand their markets, to educational resources for students, but she also thought that they mostly did not even realize what wealth they had at their disposal.

On the other hand, for older people entertainment is a way to become familiar with interfaces that can be very alien and difficult to use. And even though they might not do business online, the internet can be useful to feel connected to other people: strangers with whom they play an online game of cards, or family members who have migrated, and with whom they can remain in touch by video calls. This is how people at the margins of China’s recent development can participate to its modernization.

* Not her real name