ICT Ownership
Personal devices: a mobile phone and a Chinese-brand laptop not connected to the Internet, used half for fun half for work. In the shop, there is a landline phone, and a television – in addition to the stock of mobile phones for sale.

ICT Use
Can use all sorts of mobile phones very well, and can do basic repairs on most models. Usually sets up the phones of her clients, and trains them. Knows the most popular models and functions in both the countryside and the town.
Uses the internet on her mobile phone, but mostly to chat. Occasionally visits an Internet cafe to go online and watch movies and download music.

Information Environment
She uses her phone intensively for work: she keeps in touch with her brother, who supplies her with phones for the shop, she checks the other shop her family owns, and she can be reached by customers. She also uses both mobile and landline to add credit to her clients’ mobiles. The core of her business is in the face-to-face interaction with customers, most of whom do not use computers and can only use the basic functions of their phones. Her mobile phone facilitates the coordination with all the people involved in making her shop successful.

The computer hasn’t been integrated into her business routine yet, and everything is written down on notebooks. For now, Internet is purely for entertainment.

Ms. Hua* is in her early 20s. She and her family own two mobile phone shops, in different villages near the one where they live in Western Shandong. She began working in her parents’ shop five years ago, as soon as she graduated from middle school. In the early 2000s, her brother moved to Shenzhen, in that southern hub of factories that is the Guangdong Province, and soon realized that there were a lot of mobile phone factories that had models that were newer and cheaper than those available in the North. He proposed to his parents to open a mobile phone shop in the village: they would operate it, and he would mail the phones from Shenzhen. Until then, both parents had had casual jobs in a nearby town, the father as a builder and the mother in a factory, and had farmed the land that the village allocated to them. They decided to try their son’s idea out, and in 2005 transformed a room of their home in a mobile phone shop. It was the first such shop in the area, and they were so successful that they soon transferred it to a bigger village. They then opened a second shop in another village, now operated by a cousin, and a third one managed by Ms Hua directly. The third shop was torn down in 2011, and while they’re looking for a place to reopen it, Ms. Hua manages the main shop.

The shops sell mobile phones, Chinese brands as well as shanzhai (copies of foreign brands) phones, SIM cards, and accessories like batteries, earphones, and the dangling decorations that are so popular all over the country. Ms Hua is the main salesperson as well as the technical expert, and her father is in charge of the administration and liaising with China Mobile. Ms. Hua keeps track of the best-selling models and of trends, and then discusses orders and purchases with her brother, who sends new phones from Shenzhen about once a month, or more often if needed, and brings a suitcase-full when he comes home during the Spring Festival holidays. The best season for her business, says Ms. Hua, are after the harvest when farmers have extra cash, and during Spring Festival, when migrant workers come back to visit, and bring gifts of goods and money:

“At Spring Festival, the phones sell particularly fast, because the economy of each household is quite good, so they all buy mobile phones. May and June, that’s the off-season, that is when business is not very good, the weather is hot so people do not go out to work (in non-farming jobs), and then they don’t have much money. But then there’s the harvest, and if it’s a good harvest there is money, and they buy a new phone. They work in the fields, and then they go straight to buy a phone!”

She also helps clients choose and configure their phones and calling plans. She can do basic repairs, such as changing faulty microphones or cleaning the internal parts of the phone, as well as diagnose more serious problems and advise her clients whether it’s worth trying to repair them or not. 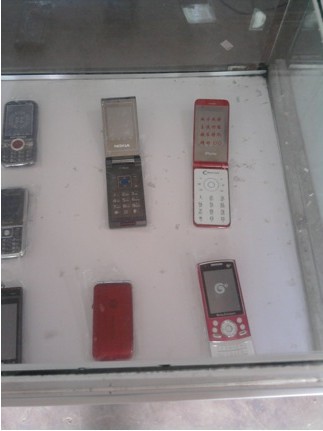 A lot of traffic in the shop comes from customers needing help to figure out the basic functions of their phones – for example, locating the volume control, or changing ringing tones – as well as shopping for better calling plans and adding money to phones – this latter a service that the shop offers for a small fee.

“I really like selling mobile phones, I love this industry! Some friends said, don’t you feel tired, always in the shop. Yes, but I’m on my own here, I do not feel irritated, or bothered… From the very beginning I liked this job, and I try to find for each customer the phone that will make him feel particularly pleased, so nobody who bought a phone in my shop can say that they didn’t get a good service. (…) The conditions are changing, but I feel that as long as my brother is in Shenzhen, I have purchase channels, and I should go forward.”

DISCUSSION
Rural Shandong and Hebei, the two Northern provinces where I carried out fieldwork, are dotted with mobile phone shops similar to the one started by Ms. Hua and her family. A room is turned into a sales space, a tiny and always revolving stock is purchased in nearby cities or through family contacts in areas where there are factories, and if business is good, the shop expands and becomes more ‘official.’ Additional services such as credit charging and repairs are offered, and one of the mobile phone operators such as China Telecom or China Unicom might notice the store and allow it to display a branded banner and posters of the latest calling plans and other special offers. This situation is likely to end in a few years: because of the very low entry barrier, recently there has been a proliferation of such stores, and competition has become unsustainable. Ms. Hua says that the county local government is trying to crack down on ‘illegal stores’ and she knows that only a few will survive, and that they will probably be located in bigger, more urban areas. She is making plans to open a store in one such area, and is trying to move up-market by focusing on service rather than low prices. But for now, shops like hers provide one of the main channels for mobile phones to reach the Chinese countryside.

Ms. Hua is young, and has a fluency with mobile phones that most of her co-villagers lack. An important part of her job is to teach her customers how to use their mobile phones – or, at times, to set them up completely and make sure that the client can at least answer the phone, if he cannot learn any other function. Such intermediation is very important to bring about an effective use of new technologies among less educated and older users.

Finally, computers are just beginning to find their way to the countryside, even though the internet is already widely available on more recent mobile phones. Many young people are regular users of QQ, a popular instant messaging software that comes pre-installed on all Chinese mobiles, due also to the very reasonable cost of mobile internet (the cheapest rate is RMB5 per month, approximately US$.80, on a monthly basis and without a contract). Internet cafes are common in urban areas, and broadband connection is being extended to many rural areas. In five years’ time, Ms. Hua ventures, the situation in her village will be very different.

* Not her real name