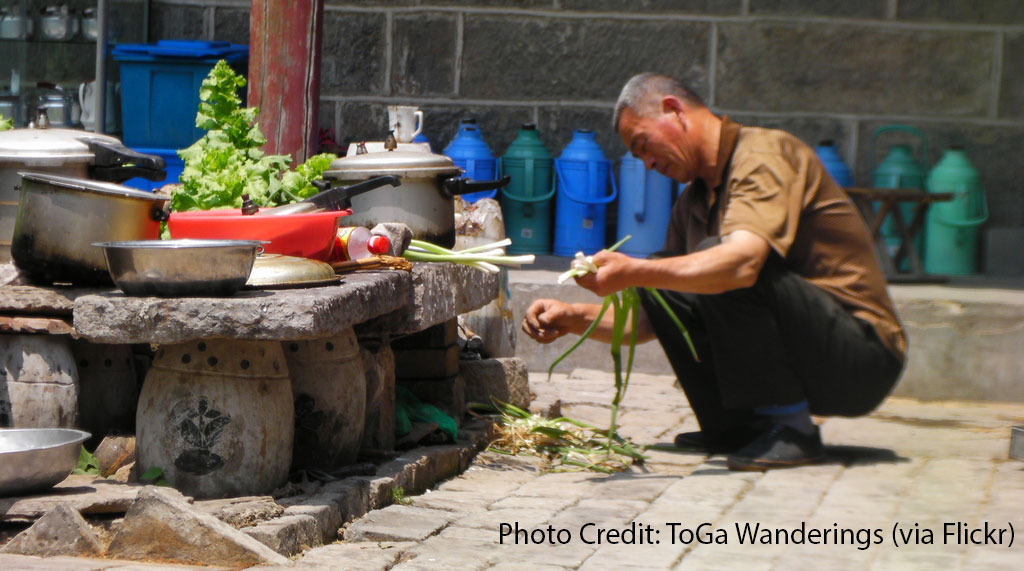 Mr. Liu* is a farmer in his 50s, who lives in a small village in the Chinese Northern province of Shandong. Officially, there are 800 people in his village; in practice, only about 100 live there full-time: everybody else has migrated to urban areas to find jobs in factories, shops, and the service sector.

Mr. Liu is married, and he and his wife have three grown daughters, all living in cities. The first two graduated from university, the third from high school. The daughters come back to visit their family once or twice a year, and they are in regular contact via the phone. They gave each of their parents a mobile phone so that they can reach them at all times. Mr. Liu and his wife always carry their phones with them, but use them almost only to receive calls from their daughters. For local calls, they use their landline, which is cheaper. Their village doesn’t have running water, but has had phone lines since the late 1990s, and has reliable electricity.

Mr. Liu has always farmed the 7 mu of land (a bit more than 1 acre) that he and his family have received in usufruct from the village (in China, land is owned by the State). Until a few years ago, he supplemented the income from farming with occasional jobs in nearby urban areas.  Since his daughters have left, he stopped working other jobs, preferring to farm, mostly wheat and corn, sometimes peanuts. As he puts it,

“There isn’t a big pressure to get a better income from the land, because almost everybody has income from work outside… Also, my goal is not to grow my income or business, as long as things remain ok, that’s all I need. My children are all grown up and have good jobs, so I don’t need much and don’t have lots of worries. Until 2 years ago I also went out to work but now I don’t. There’s no need” 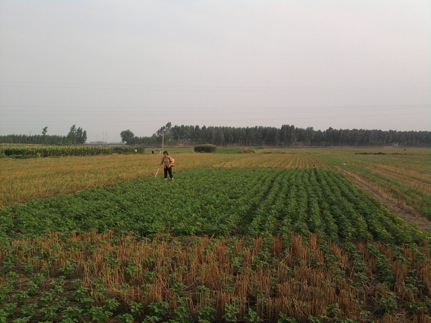 In China, the average age of farmers is increasing, which often means that farming serves as a combination of income generation and social security. Farmers who do not have any kind of state pension grow crops that can be both sold and eaten, and their main concern is predictability of income. The central government has established minimum procurement prices for major grains, including wheat and corn, in order to protect farmers from the volatility of international market. For older farmers in this area, these are the crops of choice.

Mr. Liu is aware of the potential of the Internet and mobile phones to improve his farming practices, quality of life, income (possibly), and to a certain extent he takes advantage of mobile technology. He subscribes to a local weather forecast delivered daily through SMS. It costs RMB3 per month (approximately US$.4) and it has become part of a sophisticated strategy of personal weather forecasting:

“First I watch the national weather report on television; then I watch the local one; then I compare them with the weather forecast I get on my  mobile. Then I analyze this information and come up with my forecast, and it’s 70% reliable… it’s quite good, better than before!”

He also knows that the Internet has useful information, even though he doesn’t own a computer and is not interested in owning one, because for his life, it would be useless:

“The Internet and computers are for young, ambitious people. I have enough, I don’t need to go through the trouble to get more.”

However, when he needs to make major purchases, such as, most recently, a refrigerator, he will call one of his daughters on the phone and ask her to check the price on the internet, to see if he’s getting a good deal from local shops.

Mr. Liu is well aware of the possibilities offered by the Internet and by computers, but is not very interested in trying them out directly. He remembers previous efforts to educate farmers through television programs well: he wasn’t interested then, and he is not interested now, although he admits that the internet could be a powerful tool for farmers younger and more ambitious than himself.

His knowledge about the Internet and his capacity to master the basic functions of a mobile phone come from his daughters: they are his ‘technology intermediaries,‘ who can patiently and repeatedly explain basic functions, as well as carry out more complicated ones, such as looking up prices for important purchases Mr. Liu is planning. Technology intermediaries, typically family or younger people in the village, are crucial to connect older and/or less educated people in rural areas to the possibilities offered by new technologies. The subsequent use is more centered around ‘keeping in touch’ and entertainment, but it is nonetheless extremely valued.

But Mr. Liu is not a luddite: he is happy to have a mobile phone so that he can stay in touch with his daughters – a concrete goal that is meaningful for his life and worth the effort of learning how to use the phone. The SMS-based weather forecast has also proven to be a useful, low-stress and low-cost function.

* Not his real name