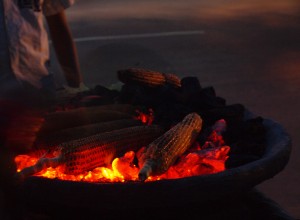 Ajay holds two different jobs in the course of a day. In the unrelenting summers of Delhi, India, he spends the morning selling cold lime juice. By 3 PM he packs up and moves about a mile away to a different location to sell grilled corn on the cob. He does this until 7-8 PM in the evening.

Ajay is originally from Pratapgarh in the neighboring state of Uttar Pradesh. He first moved to Delhi around twelve years ago. Ajay lives in Delhi with his brother and his brother’s family. His own wife and three boys (the oldest one is studying in the 11th standard and Ajay thinks he is the smartest) are back in his native village with his parents. He does not have much business in the winters so he goes home to his native village in November for a period of four months. Typically, corn and lime juice sellers like Ajay switch to selling eggs or peanuts in the winter but Ajay does not do this. He likes the village and his heart is there, so he prefers returning for a while and working the fields. He gets bored in Delhi after having spent eight months in the city.

Ajay does not own a phone currently. He had one for a while, but it broke and he hasn’t bothered to go and get it repaired. Taking it to the neighborhood repair shop would mean losing at least half a day’s worth of wages, a cost he is not prepared to pay as of yet. “It was a china mobile”, Ajay tells us. This is a direct reference to its origins, and an indirectly implies its fragile make and notoriety for breaking down unexpectedly. Nonetheless these china mobiles remain appealing. They are laden with more features and are cheaper than the more durable alternatives.

Ever since his phone broke, Ajay has been resorting to borrowing to make the regular calls back home to his wife. In fact, his wife does not own a mobile phone either, so Ajay places a call to his father’s mobile phone to speak with her. Usually, Ajay borrows his brother’s mobile phone to call back home. He will purchase a small recharge card for 15 INR, which gives him 22 minutes of talktime, and load this onto his brother’s mobile phone. Sometimes, Ajay’s older son will put a recharge on his grandfather’s phone so that Ajay’s wife can place a call to reach Ajay. She knows that Ajay returns home at 10 P.M. so she will usually call at 10:15 P.M. Ajay keeps a careful watch on the time when he is speaking on his brother’s phone. If he speaks for less than 22 minutes, the unused airtime will go to waste (or rather, will be used up by his brother). However, if he speaks for longer, his brother’s airtime will be utilized, a situation Ajay is keen to avoid.

Money and remittances, a sensitive subject: These calls are not only to catch up with each other. More often than not, the conversations revolve around the money that Ajay sends, or is requested to send, home. This is usually not a standard, recurring amount. Instead, Ajay sends whatever that he is able to at least once a month. Usually, Ajay and his brother both send money back home. However, Ajay has fewer expenses in Delhi and is therefore able to send more money. Once he has sent the money from his local bank branch, Ajay will call his wife the same day to inform her about the transaction. He will also give her instructions about how much money to keep for herself, and how much to give this father. For instance, most recently Ajay sent 5000 INR back home, of which he asked his wife to keep 1000 INR for herself and their sons, and to give the remainder to his father. Of course, giving these instructions to his wife, when she may well be within earshot of his father, can result in awkward questions later. His father may wonder why Ajay felt the need to give his wife any money separately given that he bears the expenses of the entire household. Consequently, he may express his disappointment or resentment to Ajay. To avoid such an eventuality, Ajay’s wife will take the phone from her father-in-law and make short conversation on everyday, banal things such as the weather. Then she will discreetly walk away from her father-in-law, all the while talking on the phone. Only once she is out of earshot, will she and Ajay discuss any sensitive or private matters. Ajay follows the same practice when he is borrowing his brother’s phone.

Tensions around phone borrowing: Ajay also discusses the issues around constant borrowing of mobile phones. For instance, if he and his brother have had a fight then his brother may say something like, “why do you always use my phone?” Ajay does not like this. Usually they manage, even during times of conflict or tension, because they have common relatives in the village. If they call, or if his brother calls them, they will usually ask for Ajay and his brother will have little choice but to hand over the phone. Ajay remembers a time when his brother was particularly angry with him because Ajay had spent 25,000 INR on an LCD TV that he put in his home back in the village. His brother quipped that if he had so much money then he should either buy a new phone or get his existing one repaired. Thereafter, he refused to lend his phone to Ajay relenting only when their father called him up and reprimanded him. Sometimes, however, Ajay is able to borrow a phone where the owner does not expect him to load airtime as long as the call is short. For instance, he may borrow the phone from an auto-rickshaw driver who rests in the street that Ajay works on. He will keep these calls very short, usually under a minute, and only to relay some important information – such as the details of a remittance. Ajay himself does not like loading airtime for such short calls because any unused minutes will be an unwarranted expenditure.

When phone ownership fails to be transformative: Ajay says that when his phone was in working condition for the 2-3 months that he used it, he didn’t feel that it dramatically transformed his day-to-day life. Ajay recognizes that the phone is helpful in generating income; for instance he may get delivery requests for corn or juice over the phone. Still, he is a simple man and does not like spending money unnecessarily, especially for benefits that may not be easily realized. Moreover, Ajay does not like lending his personal items to other people. For instance, his neighbors will keep asking to borrow his motorbike back in the village, which he grudgingly allows but actively dislikes. Ajay says that he only ever feels the need for a phone when his brother is angry with him and refuses to share.

Non-use of technology is starting to attract attention as a legitimate line of inquiry. Satchell & Dourish note the varieties of non-use in HCI that range from active resistance to disenfranchisement and disinterest [1]. When it comes to ICTD studies, specifically, researchers have especially considered the barriers to use such as socioeconomic, gendered or geopolitical barriers [2]. Rogers defines “discontinuance” as the act of rejecting an innovation after having adopted and used it [3]. Ajay’s story illustrates an economic barrier. The loss of half a day’s worth of wages is critical enough for him to avoid getting his phone repaired. Of course, his easy access to “china mobiles” only facilitates a situation where inexpensive, feature-laden phones are prone to constant breakdowns and more money is spent on subsequent repairs, further alienating an already disinterested user like Ajay. This in turn has led to the discontinuance of mobile phone ownership.

Still, this seemingly drastic act of discontinuance by a migrant worker is mitigated by his access to his brother’s phone, which he uses for both making and receiving calls. Such informal shared use comes with its own set of constraints and protocols, as Ajay describes, and that has been noted in the literature previously as well [4]. Interestingly enough, the nature of these constraints can prove to be enough of an impediment, that it may propel Ajay back to ownership of a mobile phone once again.