Abena* is 55 years old and sells cloth from a shop in Makola market, the major shopping district in central Accra. The shop is inside of a concrete building (by contrast to the many make-shift selling spots throughout Makola that consist of tables or blankets), can be securely locked up, and is situated in an ideal spot for attracting customers who don’t want to make their way down the crowded streets to the center of the market. Abena had to pay GH 30.000 (around $ 15,300, note that the average annual income in Ghana is $600) up front to acquire the shop for ten years.  This advance payment to rent space for great lengths of time is standard practice by landlords in Ghana for both rented apartments/houses and shop space. 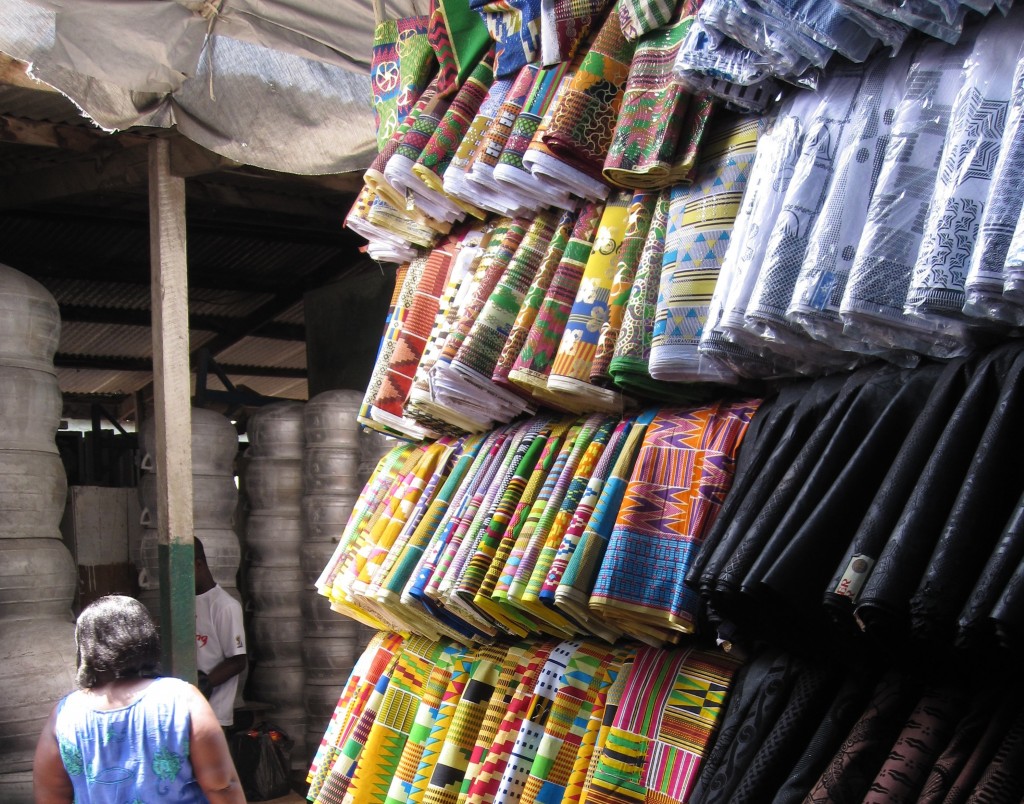 Abena comes from a privileged background and benefited from family connections in the lucrative and capital-intensive trade in cloth. While she was growing up her father was a wholesaller, importing cloth from Holland (the source of some of the most high-end and expensive cloth sold in Africa to this day). Back when the cloth trade was subject to greater government oversight in Ghana, he was granted a highly sought-after passbook. Abena commented that, in this period of heavy regulation and limitations on who could enter the trade, it was very profitable, more so than it is today. Abena reached an unusually high level of education, given her generation. After finishing secondary school and completing additional vocational training, she started working as a bank teller at Barclays bank. But eventually, she decided to follow her parent’s footsteps and enter the cloth business. She exported Ghanaian food to London and imported cloth to Ghana, making up to six trips to London per year. Now she’s stopped traveling because the frequent trips became too exhausting for her. But she still has international ties. Abena has relatives in London and the US. She sells expensive cloth of the highest quality from Holland, as well as some of the cheaper cloth manufactured in China because there is demand.  She has three workers to help her.

To acquire the shop, she used a combination of savings, a loan from Barclays bank, and a small amount of money from her father. The biggest business challenge she faces is the competition in the cloth trade from other traders and the increase in cheaply manufactured cloth especially from China, all changes in the trade that minimize her profits, “we used to get more profits, unlike these days when we get a peanut from selling cloth.” In addition, cloth from the factories changes in price unpredictably, sometimes linked to fuel price increments. This forces her to raise her own prices and makes it harder to sell.

Abena owns a phone which she uses to save her from making unnecessary trips to communicate with customers and suppliers in person. She explains: “When somebody want to buy something, the person calls to tell me. I also call people to ask them if they have a type of cloth and tell them I want the cloth. I also use it to call the factories.” After making arrangements by phone, she can send one of her workers to fetch the goods. She doesn’t use the phone for mobile banking because she doesn’t understand the process. She doesn’t buy expensive phones, since they can easily get stolen or damaged.

Abena describes herself as the type of person that “doesn’t know technology, even electricity- I’m afraid to go closer to it, that is my problem.” She asks her daughter to help her enter numbers into the phone.  She also uses the phone to call her family, which includes 16 brothers and sisters (by 9 women), her mom, her husband and three children. All three of her children attended Ashesi University, an elite private college founded by a Ghanaian man who had worked for many years in the US for Microsoft. Abena plans on attending an Internet school to learn about mobile banking, how to check her balance, keep stock of her clothes and judge how her sales are going.

Although Abena left her office work as a bank teller for the market, her daughter doesn’t want to take over the shop and prefers to work in an office. She notes that “In the office, you have to live within your salary, but in the market, you always get and see money. It’s also more relaxing for me. I wake up when I want. In the office, I have to always go, but here, if I am not well, I just close my shop and go home.”

Abena’s story offers some sense of range in the circumstances of trade among market women. She is at a later stage in her career, less interested in exploiting advantages that require a lot of strategy or labor to set up, less drawn to adventure overseas and looking for ways to save her effort and preserve her health. Given her age and stage in life, she is more concerned with ‘avoiding losses’ than maximizing profit. She relates to market price as something she must source from the factory in order to “add on,” to stay just ahead of inflation, fuel prices, etc. Her strategies in business also relate to her health.  She avoids bank loans, for example, because of the stress they can cause. She says that she no longer memorizes the names of different cloth patterns as dilligently as she once did.

Abena relates to her phone in a pragmatic, but limited way.  She finds it useful, but has not mastered some of its features (specifically text messaging) or looked into newer capabilities like mobile money transfer. Her limited technical literacy cannot be interpreted in the usual ways, as related to lack of access to a phone (since she owns and doesn’t share hers) or to an overall lack of education. There is another explanation: As an affluent, older business woman, she is constantly surrounded by younger people who’s duty it is to assist her, either by virtue of their employment or their obligation to her as a family member and elder. She has employees and adult children to whom she can delegate tasks, like reading her text messages.

Darkwah, A. K. (2002). Trading Goes Global: Ghanaian Market Women in an Era of Globalization. Asian Women, 15, 31-49. The author is the main scholar researching this special class of affluent, globe-trotting Ghanaian business women like Abena. What precipitated the entry of many such educated women with access to capital, she notes, is the overhaul of the Ghanaian economy with structural adjustment reforms of the 1990s that shrunk the public sector, the source of much stable, white-collar employment for the educated in Ghana. Abena does not fit this mold entirely, but one can see her initial aspirations for the higher-status work in the private sector, in a bank. Her return to trade was, in part, a lucrative option, with which she could leverage her family connections. She also describes trade as a lifestyle choice that lets her freely allocate her own time. She also describes trade as a lifestyle choice…she points to the freedom over her own time as part of the appeal. Despite how lucrative trade can be for businesswomen (especially in high value goods like cloth), working in the market in Ghana is generally considered to be a low-status occupation and most people presume market women to be illiterate. In Abena’s daughter’s desire to seek employment in an office, we can see that these status issues likely continue to motivate career decisions within this family.