We are now in the process of analyzing data from last summer’s fieldwork on mobile phone use and money practices (conducted by Ishita Ghosh and Aisha Kigongo – with remote support thanks to Skype and Dropbox from Jenna Burrell). A standard schema of categorization when trying to understand the personal finances of low-income populations is to identify the repertoire of financial instruments used (bank savings accounts, bank loans, microfinance loans, savings groups/ROSCAs, remittances, etc). These instruments are, in turn, often grouped into two broad categories ‘formal’ and ‘informal’ [see Portfolios of the Poor (Collins et al) for a good example]. In development terms, mobile phones are defined within this schema as a gateway, an access point into the ‘formal.’ This is what is communicated by the notion of “banking the unbanked.” We are finding through our more all-encompassing approach to examining the multifaceted ways low-income populations incorporate the mobile phone into money practices that this division (and the presumption of a transition from informal to formal) is too limiting. Rather when considering the consequentiality of the mobile phone (and mobile money) more material concerns – liquidity, security, concealment/privacy, instanteneity, and obligation fulfillment at a distance — are perhaps better terms to reflect the concerns and advantages as they are framed by low-income Ugandans themselves.

Clearly the bulk of financial instrument usage remains in the ‘informal’ category rather than the ‘formal’ among these research participants. 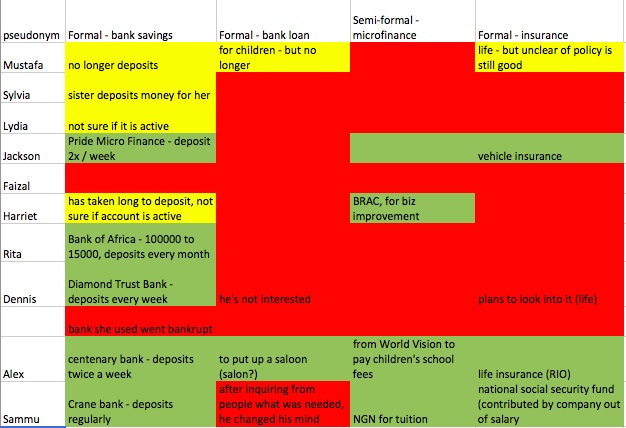 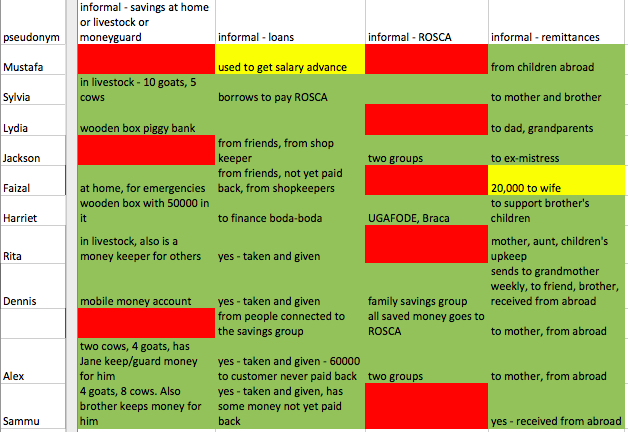 In Kampala, mobile money services have taken off (it’s another story entirely in our Delhi, India site). As much as mobile phone-based financial services might in some sense ‘formalize’ financial practices (for example, by creating a persistent record of money transfers and payments and by channeling formerly cash-based money movement through the networks of telecom companies and banks) they also resolve some recognized problems and limitations on the informal side. For example, phone calls and mobile money are a routine part of making requests for small interest-free loans from friends, family, and neighbors. They improve the ease of making such requests and also of seeking repayment. A question rarely asked is whether the mobile phone might make more legitimate and attractive the wide range of ‘informal’ financial practices. Might the mobile phone preserve informality? While the value of money transfer services for remittances (generally seen as ‘informal’) has been widely recognized, the mobile phone appears to have a role to play in small loans channeled through interpersonal relationships, and in the organization of savings groups (ROSCAs or chit funds).